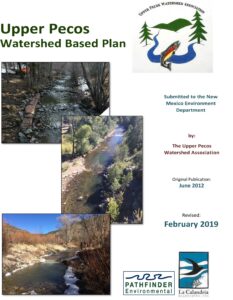 In 2016, the Upper Pecos Watershed Association (UPWA) received a grant from the U.S. Environmental Protection Agency (EPA) through the New Mexico Environment Department’s (NMED’s) Surface Water Quality Bureau (SWQB) to update this Watershed-Based Plan (WBP). The purpose of this update is to include new implementation projects and discussion of the effects of two major wildfires that occurred in the watershed in 2013. The previous version of this WBP was completed in 2012, prior to these fires. This version of the WBP also includes updates and revisions to other sections of the plan as discussed here in this Executive Summary.

The update process started with public scoping in the form of a workshop to solicit input for potential new implementation projects in the watershed. Poster-sized maps of the watershed showing all the Pecos River, Cow Creek and all of their main tributaries, with labels, were available at the workshop so that attendees could easily identify potential project locations. UPWA sent out an email to its contacts mailing list of over 400 people inviting them to attend a workshop in Pecos on April 15, 2017. The workshop was held at the UPWA office in Pecos and was attended by members of the UPWA Board of Directors, Devin Kennemore of Pathfinder Environmental, and Alan Klatt of SWQB. Two members of the Pecos community attended the workshop. Their suggestions were considered for inclusion in this updated WBP.

Section 1.4 of this WBP contains background information about UPWA and was updated to reflect UPWA’s success with implementing on-the-ground projects in the watershed. To date, UPWA has received approximately $1.6M in grants for implementation, public outreach, and updating this plan. The following is a list of projects for which UPWA has either received funding to implemented directly or provided local support for implementation.

This updated WBP includes 11 maps. Ten of these maps are in the previous version of the WBP. Each of these maps was updated to include new information as currently available. The one new map shows the locations of the Tres Lagunas and Jaroso wildfires and the fire intensity in the drainages affected by those fires. This map was prepared to augment new discussion of these wildfires in Section 2.1 Fire History and Ecology. Chapter 2 was also updated with the latest climate data, as available.

Chapter 4 Causes and Sources of Impairments was updated with the most recent developments regarding the Glorieta Camps’ wastewater treatment facility and their use of groundwater for irrigation. These new developments may have a long-term benefit to Glorieta Creek in terms of nutrient and flow impairment. Discussions involving the current impairment status of the various assessment units in the watershed reference the recently EPA-approved 2018-2020 State of New Mexico Clean Water Act 303(d)/305(b) Integrated Report. Water quality monitoring in the upper Pecos watershed is scheduled for 2019. The results of this monitoring may result in significant changes to which assessment units are listed as impaired and the types of impairment. The results won’t be available until the 2020-2022 report is completed.

Chapter 6 Pollution Load Reductions was updated by adding the new implementation projects to the appropriate tables (SSTEMP modeling and soil erosion calculations). The temperature modeling from the previous version of the WBP was retained because it SSTEMP could not be employed at the resolution of the scale of individual projects without obtaining a large amount of site-specific data, so the new projects were added to the modeling results according to the location of their corresponding sub-watershed. The soil erosion calculations were completed using scale data from the new list of implementation projects in Appendix A and parameters adapted for the projects that were included in the previous version of the WBP.

Chapter 7 Implementation Assistance and Schedule includes lists of UPWA’s collaborators, technical assistants, and available sources of funding. These lists were updated to reflect their current status. This chapter also includes tables that were updated to present project priorities and a new general schedule for completion.

The table that provides contact information for collaborators in Chapter 9 was updated with the most current available names, phone numbers, and email addresses.
The table of proposed implementation projects in Appendix A was updated to include all the newly proposed projects and exclude those projects that have been completed or are no longer necessary due to sufficiently improved water quality. The tables in Appendix B were updated to reflect current projected construction costs for the types of projects and management measures described in this plan.